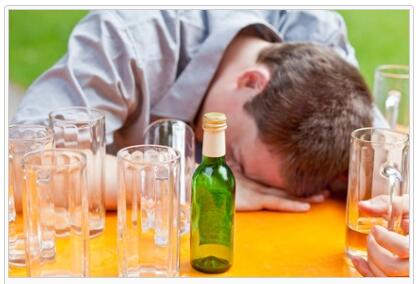 What is alcohol poisoning?

Acute alcohol intoxication manifests itself through disorientation up to loss of consciousness and a coma. Alcohol poisoning can be fatal.

Like all poisoning , alcohol poisoning is caused by the introduction of toxins into the human body. In alcohol poisoning, this poison consists of ethanol, an organic compound commonly referred to as ” alcohol “. Alcohol is a natural product that is easy to manufacture and, in some naturally occurring processes, is formed without human intervention. Alcohol has been used as a luxury food since ancient times.

But alcohol is not just a stimulant, the same applies to alcohol: “The dose makes the poison”. Because alcohol is a poison that affects the central nervous system and the brain directly, which explains its use as a stimulant. Alcohol poisoning results from the fact that the person concerned has consumed too high a dose of this poison and stimulant. Acute alcohol intoxication manifests itself through disorientation up to loss of consciousness and a coma . Alcohol poisoning can be fatal.

In the case of poisoning, the cause lies in the intake of harmful amounts of the poison, in the case of alcohol intoxication, in other words, in the intake of too large an amount of alcohol. The body has defense mechanisms to prevent alcohol poisoning, such as the onset of extreme sleepiness . Before the invention of distillation, with which the production of high-proof alcoholic beverages was made possible, alcohol poisoning was therefore rather rare.

With spirits, which usually contain around 40% alcohol by volume, the body can be supplied with a large amount of alcohol in a short time with a relatively small amount of liquid. The natural defense mechanisms can then no longer work quickly enough and alcohol poisoning can result from excessive alcohol consumption. In the past, it was often “drinking games” that led to alcohol poisoning among the participants. Today parts of the population are also deliberately caused by alcohol intoxication by so-called “binge drinking”.

With alcohol poisoning, nausea and vomiting occur initially . If the person concerned is still conscious, restlessness and confusion also occur. Furthermore, the body temperature drops and the person concerned complains of goose bumps, but without feeling cold. The lack of a sensation of heat or cold is a typical sign – many people with alcohol poisoning expose themselves to extreme cold and thus endanger their lives.

Outwardly, alcohol poisoning can be recognized by the typical tremors and symptoms of paralysis . Most of the time, the affected person sweats a lot and suffers from gait disorders . Dilated pupils, speech disorders , motor failures and other signs of excessive alcohol consumption are exacerbated in alcohol intoxication. Alcohol poisoning is also manifested by cravings and a dry mouth.

The reaction time is greatly slowed down and there are usually other behavioral problems that can be used to clearly identify excessive alcohol consumption. Alcohol poisoning can also be noticed on the basis of the apathy that occurs, which is usually associated with severe malaise and impaired consciousness .

In many cases, those affected suffer from disorders of perception and memory, which can be associated with excessively aggressive behavior . As the process progresses, the muscles relax and the affected person eventually falls into a coma.

Alcohol poisoning is relatively difficult for the body to process and often requires hospital treatment. It always occurs when a patient has consumed too much alcohol. The liver cannot process this large amount of alcohol. Typically, alcohol poisoning isn’t actually treated unless the person reports to a hospital.

With home treatment, it is normal for the person to feel bad, have a headache, and be plagued by nausea. Vomiting and unusual bowel movements are also quite common symptoms here. As a rule, there are no particular complications here. If the alcohol intoxication is very severe, the patient’s stomach must be pumped out. This is done in a hospital.

Alcohol poisoning is a potentially life-threatening condition that requires immediate medical attention. The first signs are already a warning sign and a clear sign not to touch any more alcohol. It would be best to see a doctor as soon as the first symptoms such as vertigo, nausea with and without vomiting and confusion appear.

If the person concerned is otherwise physically healthy, it may be that, with enough sleep and plenty of water, they can get back on their own in a few hours or days. However, recovery is faster and safer under medical supervision. Severe alcohol poisoning, on the other hand, leaves no choice open, the affected person has to be treated in hospital. At this stage of alcohol intoxication, most people are either passed out or on the verge of passing out.

The latter condition is just as dangerous as they could become aggressive and hurt people who are just trying to help them. Against this background, an ambulance should be called in the event of alcohol poisoning, because paramedics are familiar with drunk people and their behavior. In the case of particularly severe alcohol poisoning, there is a risk that the patient will fall into a coma and then have to be artificially ventilated. This has to happen until the person concerned can safely wake up again and the short-term consequences of excessive alcohol consumption have been overcome.

Since alcohol poisoning poses an acute risk to the person affected by the failure of the cardiovascular system, immediate stabilization is necessary. This usually has to be done in the intensive care unit, where permanent monitoring of body functions is guaranteed.

The further consequences and symptoms of alcohol poisoning depend in most cases on the amount of alcohol consumed. With very large amounts or a very short period of time, alcohol poisoning can, in the worst case, lead to death of the patient. This should therefore be examined and treated by a doctor in any case.

Those affected suffer from the usual disorders of alcohol consumption. This leads to disturbances of balance and coordination. Visual and speech disorders can also occur. The patients can often no longer remember what happened and not infrequently lose consciousness. This can also lead to injuries if the person concerned falls.

Serious poisoning can result in coma or death if circulatory failure occurs. The internal organs are also damaged by alcohol poisoning. With regular poisoning, life expectancy is reduced.

There is only one effective remedy that can help prevent alcohol poisoning. This is simply to limit the consumption of alcohol to a harmless level. The often recommended intake of fatty and hearty meals has no influence on alcohol poisoning. Such a meal consumed before drinking can only reduce the rate of absorption of the alcohol for a short time; this does not change the amount and composition of the poison ingested.

If the patient has survived acute alcohol poisoning, the necessary follow-up measures depend on whether and what physical damage the person has suffered. Although acute alcohol intoxication can be life-threatening, this form of intoxication is not necessarily accompanied by physical or psychological long-term effects. Young patients in particular usually recover very quickly.

However, this can lead to alcohol poisoning not being taken seriously. If a minor patient is suspected of regularly consuming excessive alcohol, the parents should be informed. Young people who are of legal age should in any case be informed about the dangers of “binge drinking”, which is cultivated as a kind of hobby in certain social classes.

It is best to give the young people the contact details of a counseling center; it is even more effective if contact can be made with a social worker in the hospital. In addition, alcohol poisoning occurs again and again in people who are dependent on alcohol. In this case, an addiction treatment is one of the necessary aftercare measures.

However, rehab treatment without psychological support is very rarely successful. A central element of aftercare is therefore also psychotherapeutic measures that contribute to a change in behavioral patterns and reduce the risk of relapse.

If alcohol poisoning is suspected, the emergency doctor should be informed immediately . If the poisoned person can still be contacted, any information about alcohol consumption and possible allergies or illnesses should be collected until the rescue service arrives. If the poisoned person is unconscious or if the pulse is only weakly noticeable, breathing must be checked. Depending on the result, the person affected should either be brought into a stable lateral position or immediately resuscitated.

In any case, the poisoned person must be protected from cooling down, for example with a blanket or by turning on the heating. If vomiting occurs , it must be ensured that the person concerned does not suffocate. Drinks such as water or highly diluted coffee can alleviate the symptoms of intoxication. If you have consumed too much alcohol yourself, you should have a friend accompany you to the emergency room. It is also advisable to vomit and excrete the alcohol in this way.

In most cases, however, it is necessary to have the stomach pumped out in the event of alcohol poisoning, which is why a doctor must be consulted in any case in the event of excessive alcohol consumption. The fluid and mineral balance should then be balanced again through a balanced diet and water.