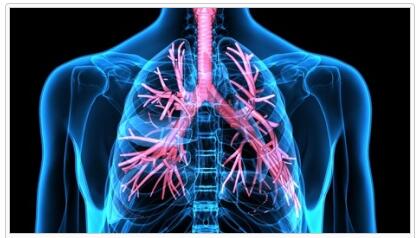 The acute bronchitis is an inflammatory disease of the bronchi caused in 90% of cases of viruses. The disease is characterized by a strong cough. Acute bronchitis usually heals within 14 days. However, complications can lead to chronic bronchitis .

What is acute bronchitis?

Acute bronchitis is an inflammatory disease of the bronchi that is caused by viruses in 90% of cases.

Acute bronchitis is an inflammation of the lower respiratory tract, which is usually triggered by so-called cold viruses , sometimes also by bacteria. The bronchi are a system of tubes that branches off the windpipe and leads to the lungs.

The mucus catches the smallest particles and pathogens so that they do not get into the lungs and the cilia carry them out of the airways. In acute bronchitis, this mucous membrane becomes infected and inflamed.

In most cases, the causes of acute bronchitis are viruses and, more rarely, bacteria. Acute bronchitis caused by fungi is possible, but it happens extremely rarely and only when the immune system is severely weakened.

In addition, acute bronchitis can occur as a precursor or companion to another disease, such as measles , scarlet fever , whooping cough or chickenpox . The viruses that most commonly cause acute bronchitis in adults are influenza viruses such as influenza or rhinoviruses. In children, the disease is usually caused by other viruses, here the so-called RS or ECHO viruses are the triggers.

A bacterial infection of the bronchi usually takes place as a secondary infection, i.e. as a result of an already existing virus infection. Irritants such as fine dust, vapors and gases can also trigger acute bronchitis.

Acute bronchitis manifests itself in the early stages as a dry cough and a runny nose and thus resembles a simple cold . But once the viruses get going, there are sore throats, headaches and body aches as well as fever . Talking becomes increasingly difficult and ends in hoarseness . A very general and comprehensive feeling of illness is spreading.

In the period that follows, a productive cough develops in which secretions are produced and coughed up. If the secretion takes on a yellowish green discoloration, a superinfection caused by bacteria has also formed. In a few cases, blood may also be admixed, which is an indication of damaged mucous membranes.

These are of little relevance to the course of the disease, but should be clarified by a doctor to be on the safe side. Sometimes, however, the cough is also unproductive and healed in a week. It can happen that even after a week there is no significant improvement, possibly even a superinfection has occurred.

If breathing noises such as wheezing, rattling and rattling or possibly shortness of breath occur, a visit to the doctor is definitely necessary. Acute bronchitis has probably become more complicated and can turn into chronic bronchitis or pneumonia .

The first symptom of acute bronchitis is a dry cough , accompanied by common cold symptoms such as runny nose, fever, fatigue and aching limbs. The dry cough is usually particularly strong in the morning when you wake up.

After a few days, the cough changes, mucus forms that can be coughed up. If the acute bronchitis is caused by viruses, the mucus is whitish in color; if it is bacterial, it is purulent and green to yellow. At this stage, usually feels very cut off , the cough is painful, sometimes it takes a little blood streaks in abgehusteten secretions.

The chest burns and breathing sounds are clearly audible. If the symptoms of acute bronchitis do not subside within a few days, it is advisable to consult a doctor. They will listen to your lungs and do a throat, nose, mouth, and ear exam. Palpation of the neck will show if the lymph nodes are swollen .

A blood test , which can also be used to determine whether a bacterial or a viral infection is present, provides further information . To make sure that you have acute bronchitis, the doctor can have nasal secretions and coughed up mucus examined, and the lungs can be X-rayed.

The lungs become inflamed like a focal point. The individual foci of inflammation can vary greatly in size and stage of development. Acute bronchitis is particularly dangerous for patients with chronic obstructive pulmonary disease (COPD) . Acute bronchitis can seriously worsen the health of COPD patients.

Especially in small children, but also in adults, acute bronchitis can lead to inflammation of the finest bronchial branches, the so-called bronchioles. In rare cases, permanent blockages of the bronchioles and scarring changes can occur. Young children with acute bronchitis may develop bronchiectasis or permanent changes in the airways later in life. Bronchial asthma cannot be ruled out either.

Acute bronchitis is harmless in most cases and heals without any consequences. Adults who are healthy in themselves can therefore obtain relief over a period of one to two weeks with classic home remedies such as inhalation with essential oils. If the symptoms of the illness do not improve significantly within ten days or if the feeling of illness is exacerbated by high fever, fatigue and bloody sputum, the doctor should be consulted.

One or two bronchial infections during the cold season are widespread, especially among kindergarten and school children, and are no cause for concern. A visit to a general practitioner or pediatrician is completely sufficient. In contrast, frequent flare-ups and a slow healing process are often associated with an underlying disease. Consultation with a specialist in allergology , pulmonology (lung diseases) or immunology (immune deficiency) is recommended .

Seniors, patients with bronchial asthma or cardiac infarction as well as babies and small children are among the risk patients of acute bronchitis. Since their airways quickly narrow, any deep-seated cough with or without sputum in these patient groups should be checked immediately by the treating doctor or pediatrician.

If the acute bronchitis is only mild, it will heal within 14 days and does not require any special therapy. If it does not heal on its own and drag on, it must be treated with medication to prevent chronic bronchitis from developing.

In the case of bacterial infections, antibiotics are administered; in the case of a virus attack, they do not work. Here only the symptoms can be alleviated. Medicines that loosen the mucus and make it easier to cough up are helpful . Herbal cough suppressants reduce the swelling of the mucous membrane and reduce inflammation. Chemical substances act directly on the cough center in the brain and thus calm the urge to cough. This effect is unfavorable for congested bronchi, since then the mucus is not coughed up and the bronchi become clogged.

The chemical cough suppressants are therefore more suitable for dry coughs. In addition, anti-inflammatory and analgesic medication can be taken for acute bronchitis. It is important to take it easy and take a break. You should drink a lot, this helps to liquefy the mucus and make it easier to cough up. Breast wraps with quark or potatoes also have a beneficial effect on the healing process of acute bronchitis.

Acute bronchitis rarely represents a long-lasting medical problem. It usually heals within seven days and at the latest after ten days. Only a dry cough resulting from irritation of the bronchi can persist for a few days longer. In rare cases, the disease lasts for several weeks.

Since acute bronchitis often heals on its own within a few days, it is usually not necessary to visit a doctor or even a hospital. Refraining from smoking, cold air, and excessive exertion are beneficial for healing.

In the event that the patient’s lungs have already been damaged or that the patient has a weakened immune system, acute bronchitis can also manifest itself. Depending on the type of trigger and the resistance as well as the self-cleaning function of the lungs, it can also turn into chronic bronchitis.

A second infection with bacteria that colonize the weakened bronchial mucous membranes can also occur. If antibiotics are not used here, there is a risk that the disease will spread and the associated risk of further infections of the respiratory tract .

In most cases, however, acute bronchitis has no consequences. An adult suffers from it an average of four times a year.

You cannot prevent acute bronchitis immediately. But you can definitely ensure a healthy atmosphere in the airways by avoiding harmful influences. Smoking and frequent inhalation of irritants and exhaust gases damage the respiratory system and the ability to defend against bacteria and viruses in the long term. A healthy lifestyle, a balanced diet and regular exercise in the fresh air strengthen the body so that acute bronchitis is less likely to develop.

Acute bronchitis is a disease that often heals spontaneously, but may require follow-up care by the doctor or patient depending on the severity. In particular, as the illness was linked to a fever, the check-up at the doctor’s after the illness is important for follow-up care. He can give his consent to take on stress in everyday life and sport. In the case of bacterial diseases, it is also important to rule out the risk of infection for the environment.

After an acute bronchitis, the bronchi and the upper airways are very irritated from the constant coughing . It is therefore important to protect the affected structures during aftercare. Vocal cords can also be affected by coughing. Little speaking, little hawking that puts strain on the vocal cords and drinking a lot of water are therefore ways of protecting the structures. Lollipops or hot milk with honey can soothe rough areas of the throat.

Fresh air is also good for regenerating bronchi and lungs. If it’s too cold, walks shouldn’t be too long at first. If the cough comes back or if you feel weak and have a fever, you need to see a doctor. Follow-up care includes identifying a relapse early and preventing it from spreading to the lungs in advance.

Acute bronchitis requires medical attention, but simple home remedies can also provide relief. Increased fluid intake is important so that the stuck mucus in the bronchi liquefies. Herbal teas with anti-inflammatory and expectorant active ingredients such as thyme , ribwort , chamomile or fennel , preferably sweetened with honey, prove to be very effective .

Lots of fruit, vegetables and soups, which can be enriched with garlic or ginger depending on your taste , supplement the amount you drink and ensure an adequate supply of important nutrients and vitamins. Inhalations with sea salt or herbal essences dilate the bronchi and promote expectoration, as does breast compresses with quark or onions. In addition to the home remedies, a variety of cough suppressants are available in the pharmacy , which have an antitussive or expectorant effect as required.

A visit to a sauna or steam bath promotes blood circulation in the mucous membranes to a great extent and can often prevent the virus from spreading in the early stages of the disease – in the advanced stages of the disease it is better to avoid it due to the high circulatory stress. Physical rest helps the organism to regenerate, if you have a fever, bed rest is required. In fever-free patients, gentle exercise can promote healing as long as cold air is not inhaled. Giving up smoking affects also a positive impact on the disease process.