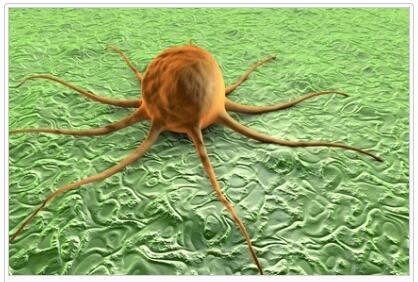 In an adenocarcinoma is a malignant tumor. It develops from glandular tissue. Adenocarcinoma can develop in different areas of the body.

Adenocarcinoma is a malignant tumor. It develops from glandular tissue.

In medicine, the changes in glandular tissue are divided into adenoma and adenocarcinoma. An adenoma is a benign cell change. The malignant change in the tissue is called adenocarcinoma. Doctors also speak of a malignant tumor in these cases . Physical change processes that have a progressive and at the same time destructive character are referred to as malignancy.

In severe cases, they can lead to the death of the patient. Adenocarcinomas occur in a variety of different cancers that can spread across most of the body. The best known are breast cancer , stomach cancer and colon cancer . Adenocarcinoma is also found in lung cancer , kidney cancer and prostate cancer . These are other cancers in which adenocarcinoma develops

Pancreatic carcinoma , bile duct carcinoma, esophagus, and body carcinoma in the uterus. The adenocarcinomas have different growth patterns, which are subdivided micro- and macro-biological. They often express themselves about an unintentional loss of weight, the appearance of nausea , inexplicable bleeding and a lack of energy or strength despite the existing will.

They are diverse and not all risk factors have been found so far. A general statement can therefore not be made. Some people have genetic predispositions. These can be inherited or arise in the course of life through mutation. In addition, environmental influences such as gases or pollutants in the air are considered to cause cancer.

A weakened immune system can also increase the risk of developing tumors. The absorption of toxins through alcohol or nicotine is considered to be carcinogenic. If the body is exposed to heavy loads over a longer period of time, cells will increasingly divide. This can be a cause of tumor formation.

The symptoms depend on the site of origin and the type of adenocarcinoma. Individual symptoms therefore arise. Often there is blood in the urine or stool and vomiting of blood . Inexplicable pain occurs in the affected areas.

The digestion is disturbed or a feeling of tightness body develops. The neoplasms can feel hardened or bulges under the skin due to the proliferating tissue. Malfunctions or failures of the affected organs occur. The patient suffers from lack of energy, nausea, or vomiting. The symptoms are varied and are often initially attributed to other diseases, such as a cold or a heart attack.

You may experience pain when urinating or during sexual activity. Physical or sporting activities are perceived as strenuous. The general well-being decreases and there may be a change in mood . The pain increased steadily in the following weeks. It can lead to insomnia , restlessness and fatigue.

The growth of an adenocarcinoma is progressive. The carcinoma usually grows over weeks or months until it is surgically removed. The diagnosis is made by a doctor. The methods used are imaging processes such as X-rays , the creation of a blood count or the removal of tissue samples .

The danger of adenocarcinoma is that it is often diagnosed too late. The first symptoms such as heartburn and slight difficulty swallowing often do not prompt a doctor’s visit. This is not necessary at first, but the symptoms should be monitored further. If they persist, it is advisable to consult your family doctor . If symptoms such as pain when ingesting food, cramps in the esophagus or a feeling of choking in the throat occur, a doctor should be consulted as soon as possible.

If there is a suspicion of a disease of the esophagus, referral is usually made to an internist . The named symptoms can not only indicate a life-threatening illness, they also severely limit the quality of life. If no treatment is given or if symptomatic self-treatment is given, the symptoms will worsen. The esophagus is further irritated by rising stomach and bile acids. In the case of persistent sore throat, hoarseness, cough, increased salivation, belching, palpable lumps in the neck area and permanently swollen lymph nodes, a specialist (ENT, internist) should also be consulted.

Further symptoms such as diarrhea and vomiting (especially when blood is mixed in) appear as the disease progresses and require immediate treatment. Failure to treat leads to life-threatening conditions due to dehydration, mineral deficiency and impending circulatory collapse. Due to the accompanying weight loss, the patient increasingly loses resistance. Persistent or severe neck and back pain are also serious complaints that suggest that the disease is progressing well.

Treatment for adenocarcinoma depends on the size and location of the cancer. In most cases, surgery is done. In this case, the diseased tissue is removed. This is followed by chemotherapy or radiation therapy . In chemotherapy, substances are used that are supposed to prevent cells from dividing.

The substances used are cytostatics. Within the therapy, the cell division of cancer cells as well as healthy cells is prevented. As a result, the chemotherapy patient suffers from numerous side effects. These include hair loss , impairment of the mucous membranes in the nose, mouth and throat and complaints of the digestive tract. The patient suffers from exhaustion, tiredness, vomiting and nausea.

In addition, there may be an increased tendency to bleed . During radiation therapy , the diseased tissue is attacked and destroyed by ionizing radiation. The side effects of therapy include headache , nausea, vomiting, fatigue, and loss of appetite . In addition, digestive problems and inflammatory skin changes can occur.

The side effects of chemotherapy or radiation therapy are very stressful for the patient. They are long-lasting and can trigger further emotional problems. The person concerned cannot pursue any professional activity for several months or years. In addition, he lives for several years in fear that the cancer will spread further, develop in new places or return despite the measures taken.

Since adenocarcinoma is a malignant tumor, the usual complications of cancer occur with it, which severely limit the quality of life and, in the worst case, can even lead to the patient’s death. In most cases, this results in blood in your stool or a bloody vomit. Patients often suffer from panic attacks when they see bloody vomiting or bloody stools.

There are also digestive problems and abdominal pain . Those affected suffer from diarrhea , nausea and vomiting frequently. Also take pain on the toilet and a general feeling of illness arises when a person concerned. Most patients also suffer from mood changes and depressive moods.

Pain and discomfort with digestion can also lead to sleep problems. The resulting loss of appetite also leads to malnutrition and deficiency symptoms.

The treatment itself does not lead to complications. However, a complete cure cannot take place if the tumor has already spread to other regions of the body. In the further course the patient dies from the consequences of the cancer. Life expectancy is usually limited by adenocarcinoma.

There are no fixed and generally applicable preventive measures to avoid adenocarcinoma. A healthy lifestyle can minimize the risk of developing cancer, but it should not be seen as a unique selling point. A healthy and balanced diet and avoidance of toxins such as alcohol, nicotine or drugs are recommended measures.

In addition, sufficient sleep should be ensured and permanent stress should be avoided. Participation in various regular check-ups can be used as an additional measure. The check-ups should be carried out at repeated intervals from a certain age.

In the case of adenocarcinoma, follow-up care options are usually very limited. Since this disease is a tumor, the person affected should take part in regular examinations in order to identify and treat other tumors at an early stage. In general, an early diagnosis and treatment of the disease has a positive effect on the further course and can prevent complications.

In most cases, the adenocarcinoma is removed with surgery. After this procedure, the person affected should definitely rest and take care of their body. In doing so, strenuous activities or sporting activities should be avoided in order to protect the body. In addition, radiation therapy is often necessary to completely alleviate the symptoms. However, adenocarcinoma cannot always be treated in general.

In some cases it also leads to the death of the person affected or to a significantly reduced life expectancy. Since adenocarcinoma can also lead to psychological complaints or depression, contact with other sufferers of the disease makes sense. This can lead to an exchange of information, which can make everyday life easier.

A diagnosed adenocarcinoma is a serious disease that requires medical treatment. Self-treatment cannot cure the disease, but symptoms can be alleviated.

The greatest impairment in everyday life is the discomfort when swallowing while eating. Therefore, the consistency of the food should not be too firm. Food that is too hot and spicy also irritates the lining of the esophagus and can cause additional pain. To avoid heartburn – which would also attack the mucous membrane – eating several small meals throughout the day has proven beneficial.

Basically, a balanced, healthy diet is very important. A sufficient amount of vitamins , ballast and minerals strengthens the body’s defenses and supports the organism during the healing process.

It is also important to minimize additional stress : exercise in the fresh air, relaxation exercises such as autogenic training , light endurance sports or listening to music can help. Since cancer is also a major emotional burden for those affected, consultation with a psychotherapist should be reconsidered.

Regular discussions in a self-help group can also help to balance out this psychological pressure. In order to support the body during chemotherapy and radiation therapy, the intake of concentrated micronutrients or homeopathic drugs is a possibility.